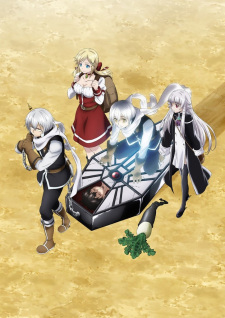 Plot Summary: Far to the north of the world lies Hell's Gate, a portal formerly used by the Demon Lord to invade the human realm. Thanks to the legendary hero Shion Bladearts, wielder of Excalibur, and his loyal band of companions, the Gate was sealed off and the demonic threat was vanquished. Unfortunately, the seal was incomplete and has begun to weaken, allowing the demons to once again begin their attack. Worried about the safety of his village, selfish and perverted farmer Touka Scott dig pitfalls to defend against the demons. But fear not, for Shion is on his way to reseal Hell's Gate and save humanity! Or at least he was, because the legendary hero is dead, having fallen into one of the pitfalls Touka dug. Luckily, dealing with the dead is the specialty of necromancer Anri Haynesworth. While she can't revive him, Anri can at least salvage their quest by forcing Touka's soul into Shion's rotting body and dragging him along to Hell's Gate in Shion's place. Not wanting to be left behind, Touka's childhood friend Yuna Yunis tags along. Together, the three of them set out as what just might be the most unsuitable party to ever try to save the world!