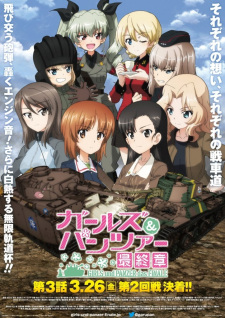 Plot Summary: The quarterfinal round of the Winter Continuous Track Cup is in full swing, and each school is going all out. What started as a furious back-and-forth firefight between Ooarai Girls Academy and Chi-Ha-Tan Academy has become a 12-hour jungle slugfest with neither team having the advantage and almost everyone running on fumes. In spite of this, Miho Nishizumi and her teammates continue to fight into the morning, hoping to land a decisive blow before their rivals. Meanwhile, Kuromorimine Girls Academy—now led by Erika Itsumi—is struggling in its match against Pravda High School. Taking Maho Nishizumi's words of advice to heart, Erika manages to break free of Kuromorimine's rigid, traditional tactics and turn the tide in her favor. At the same time, St. Gloriana Girls College faces off against Anzio High School, while Saunders University High School has a tough fixture with underdog Continuation High School and its mysterious sharpshooter, Jouko. With only four semifinal spots up for grabs, the members of each team must give their absolute best performance if they want to survive and successfully make it to the next round!